IKB Dortmund: On the road with the Duke instead of the smartphone

We are pleased that the Immanuel Kant Gymnasium in Dortmund, as a new programme provider, went on their first practice expedition with 36 students. The following report can be found on the school’s website.

Congratulations to everyone involved to this huge achievement! 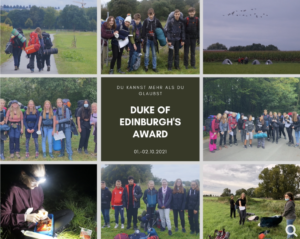 “On the first weekend in October, 36 students from the 8th grade had a very special experience: As part of the Duke of Edinburgh Award, they completed a two-day hike in small groups with an overnight stay in a tent.

At 2.30 pm on Friday, the backpacks were loaded with tents and spirit cookers, the route was discussed again and the first aid kit was filled up. Then the 6 groups set off one after the other in the direction of Kurler Ei. Ms Pfeil, Ms Staudacker and Ms Pszolla met the groups halfway to hold a short workshop on the rules of conduct when hiking. The three different routes of about 7 km were covered at different speeds: Some groups were already at the tent meadow after the calculated 3 hours, while some only reached the meadow in the dark after almost 5 hours because they involuntarily put in a few more kilometres. But the joy was all the greater when they saw the other groups again.

At the tent site, one group was shocked to discover that they had left their tent at the school. It was a good thing that the teachers revealed after a while that they had it in their luggage. Thus, after setting up the tent, all groups could be instructed in the use of the camping cooker and prepare a warm meal. While most of the groups ate the classic pasta with tomato sauce, one group spiced up the dish with carrots, onions and lemon juice squeezed in the light of the headlamp. The teachers then left the campsite and the students used this for night walks in the forest, making tea or playing games. However, the rain drove everyone into their tents at night so that Mrs Staudacker, Mrs Böckenfeld and Mr Husmann could sleep undisturbed in their tents.

In the morning at 7am, the first students were already up at dawn to freshen up and make a warm tea. At 9.30 am, the last groups had stowed their tents again and set off with the map on their planned 12 km return route. At two points on this return route, the walkers were to meet up with their leader. When Ms Peck reported in despair that her group had still not reached the first checkpoint after three hours, we clearly realised that map reading and orientation without smartphones and Google Maps needed to be focused on again. In the end, however, all the students arrived at the school. Rarely do so many pupils burst into cheers at the sight of the school as they did after this strenuous hike.

Dear pupils, you can be very proud of yourselves that you have persevered to the end despite fully loaded backpacks and for the most part completely untrained! You didn’t let long detours, wet shoes, blisters and aching shoulders deter you from your path. We are very much looking forward to the real expedition in unknown regions that will follow in the summer!